The Demänovská ice cave represents the northern part of world famous Demänovská caves. It is interesting because of its permanent ice interior, bizarre and majestic shapes of the underground spaces, precious cave fauna and also its rich history. It is located on the right side of the Demänovska valley on the northern side of the Nízke Tatry. It lies in the natural nature reservation of the Demänovska valley in the area of the Nízke Tatry National park.

The national natural monument Demänovska cave on the north side of the Nízke Tatry is the longest cave complex in Slovakia. Its well known parts include the Demänovska cave of freedom which for many years has impressed the visitors with its rich rock filling of various colours, the mystical underground Demänovska stream and its fabulous lakes. It is the most visited and accessible cave in Slovakia.

Važec cave is one of the most famous caves in northern Slovakia. Although it belongs to the shortest accessible caves, it is well known because of its rich stalactite decoration, interesting relics of cave bears as well as valuable cave fauna.

Vlkolínec is located in the Veľká Fatra mountain range at an altitude of 718m under the hill Sidorovo and not very far from the Hrabovo Apartments. Vlkolínec is a permanently inhabited village, nowadays with 29 inhabitants in 18 houses from a total number of 55 houses. In 1993 it was added to the UNESCO list of world cultural heritage sites as a unique land habitation architectural complex where time appears to have stopped and which offers the opportunity to see a traditional mountain settlement and the traditional way of life in Slovakian mountain environments.

Ružomberok the centre of Lower Liptov, lies on the confluence of the Rivers Váh and Revúca in the western part of the Liptov hollow basin at the edge of significant Slovak mountain ranges Veľká Fatra, Chočské vrchý and Nízky Tatry.The first written mention about the settlement is from 1233.The town privileges were granted in 1318. To the town gave them Archbishop Tomaš from commandment of the Lord of Zvolen, Magister Knight Donč.Archbishop Tomaš to give the town privileges.In 1340 King Charles Robert agreed with the town privileges and extended them.

The ruins of Likava castle stand on one of the rocky peaks of the Chočské Vrchy on the right bank of the river Vah. It was supposed to protect the crossing point of the River Vah near Ružomberok and the important route from Považia to Orava and Poland. The Lord of Zvolen Magister Donč was responsible for the building of the castle. The castle is partly preserved and is accessible to the public during the summer season.

A well preserved castle standing on limestone cliffs, at a height of 112m above the river Orava, overlooking the village of Oravský Podzámok. The castle is a national cultural monument.Orava castle once the residence of the Orava Lord was built in the 13th century on the site of a former prehistoric settlement. The first written historical mention comes from 1267, when it was the King’s property. Over time the owner has changed. The current look of the castle is due to the Thurzo dynasty, whose reconstruction work put the castle among the most important buildings of the renaissance age. In 1800 there was a big fire at the castle and it was badly damaged. It was though quickly repaired, and the Pálffy dynasty the last owners tried to tried give it a romantic feel.

In the surroundings of Ružomberok there are several fishing areas under the administration of the city of Ružomberok. One of them, VN Hrabovo is right in front of Hrabovo apartments resort. The water surface has an area of 1.8 ha and at its deepest it is 7-10 m. The reservoir is located in the beautiful surroundings of the Hrabovo valley near to the base cable car station leading to Malino Brdo. In the reservoir there are river trout, rainbow trout, perch, chub, carp and burbot. Here is the first degree of nature protection.

A very popular and relaxing sport suitable for the whole family. In Liptov there is beautiful scenery and from the saddle you will enjoy it even more…..Horse club Mustang offers you: riding in the riding hall,courses for beginners, children and advanced,rides and outings in the Veľká Fatra.

Try the summer adrenalin attraction at Skipark Ružomberok, just 50 metres from the Hrabovo apartments. There are prepared trails of various difficulties with lengths of 3 to 5.5km and an elevation change of 423m.

In Slovakia there are 17 areas where Para gliders can take off. These jump sites are approved by the amateur flying association of the Slovak Republic. Two of them are in the nearby surroundings however alongside these areas there exists a huge amount of unofficial areas. Tandem jumps are provided at Chopok and at Donovaly, and courses at Páncova 5km from Ružomberok. 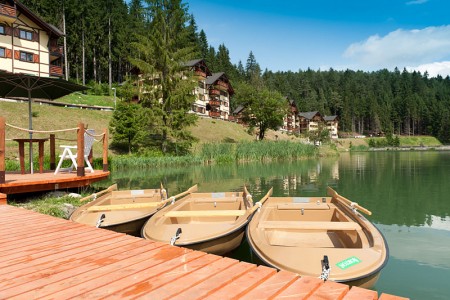